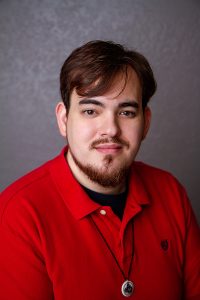 Grant Matthews was born in Columbia, Missouri, and has bounced around the state for a good portion of his life. There’s a decent chance that anywhere in Missouri you’ve been, he’s lived near or has family there; but please prove him wrong, he loves to learn about new places. He still hopes to see the world, but he loves this state and has been in Springfield for the last decade.

If you ask him about how he got his start in massage, he’ll laugh and tell you it was pulling on his grandpa’s big toes; but really, Grant discovered his love for massage on a slightly odd path. Originally he planned to be a Veterinarian, and he attended the University of Missouri as an Animal Science Major/Pre-Vet Scholar for two years. Life showed him that wasn’t where he needed to be, and after a brief stint at his grandparents’ farm outside of Ava, Grant found his way to Springfield for work. Growing up, he would always be giving back or foot rubs to friends and family at reunions and get-togethers; and he learned more specific techniques while helping home health workers with his grandmother during high school. It wasn’t until he saw the ads for the massage school (PMTC) though, that Grant realized what he was supposed to do was something he’d been doing all along.

Grant graduated from PMTC’s Clinical Massage program in early 2011 and has been working steadily in the industry ever since. His training includes Swedish Massage, PNMT, basic relaxation, and a general foundation in Manual Lymphatic Drainage (MLD). Coming from a science major and clinical background, Grant does have a strong grasp on anatomy and the physiological impacts of massage. His time in school, and 8+ years of experience though, have helped him to zero in on his passion and advocacy for relaxation. Knowing the impacts of stress, both physical and emotional, upon human health, Grant works to make every massage a soothing and healing experience. He comes to each session from a whole-person perspective, and integrates different therapeutic techniques into each session, while still working towards a full-body relaxation. He’ll dig in when it’s necessary, but Grant wants each person to walk out of the service room feeling both relieved and refreshed.

In his personal time, Grant is a giant, and proud, nerd. He spends time with his family and friends playing tabletop games, going to movies, and attending Renaissance Fairs (often in full garb). Sometimes he’s a homebody, but he also likes to go out to concerts, plays, and live comedy events. New experiences are great, and he’ll try just about anything twice. And, he still has a huge love for nature and critters of all sorts. His cat helped him write this . . . the dogs were all busy.