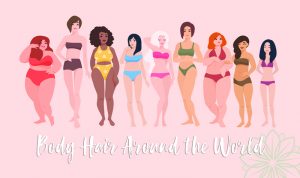 The grooming habits of American women are well known today.  Like most things’ appearance-related, they are media-driven.  The removal (and trimming) or pubic hair in the US appears to be tied to the invention of the bikini in the 60’s.

Different countries prefer specific hair removal methods to others.  These might include waxing, shaving, depilatory creams, laser hair removal or threading.  What are the personal grooming habits of women around the world?  We’re here to tell you!

The UK:  The UK is most like the USA in preferring waxing and laser hair removal.  Shaving is another popular method simply because it is more accessible, convenient, and costs less.

Japan:  Women in Japan have preferred to shave only their legs and underarms, leaving the bikini and pubic area untouched.  It is also quite common to remove facial hair and peach fuzz for a smooth, glasslike appearance.

Australia:  Australian women are known for being beach babes, and what those beach babes do not want is unwanted hair.  Removing their leg, underarm, and facial hair as well as hair in their bikini region with laser hair removal or waxing is not uncommon.   Australians are so into hair-free, smooth skin that those that do not remove their hair are considered outliers.

India:  Predominantly it is the women of upper classes that now remove their unwanted leg, underarm, and pubic hair in India with their chosen removal method being primarily depilatory creams.  However, laser hair removal is quickly becoming more popular as laser technology develops for use on darker skin tones.  With the laser hair technology, it is becoming more popular to remove hair from the chin, upper lip, underarms, cheeks, and bikini area.

Brazil:  You likely assume that the term “Brazilian wax” comes from Brazil, but that is not true.  It is American and is not very popular in Brazil.  The most popular grooming style among Brazilian women is to leave a “landing strip” of hair.

Germany:  It is common for women to shave their legs, underarms, and bikini region in Germany.  Much like in the US, it is extremely popular to be smooth and hair-free.  Laser hair removal is most popular hair removal method because it is most effective, efficient, and permanent.

China:  Hair removal in China has not been a significant beauty ritual, up until recently.  Chinese women didn’t bother to remove their leg or armpit hair, as hair was just part of your body and nothing to be ashamed about.  Body hair is considered completely natural.  Hair removal methods (for those mostly in big cities) use depilatory creams or shaving.

As you can see, women throughout most of the world remove at least some of their body hair.  While the parts to be plucked may change according to trends, if time tells us anything, it is that women will continue to want to keep at least some portion of their bodies hairless.